Before we can relax and get into the details about this plant, let us first say that we love the broad bean so much, some may deem it almost inappropriate. But tell me, what else grows so vigorously, so tall and strong in the winter garden? What bean has such culinary versatility? What plant is steeped so pungently in history and culture?

I tell you there is nothing like the broad bean. Also known as the fava bean, it is a delicious and abundant food crop, but is also extremely useful as a soil improver, capturing the elusive nitrogen from the atmosphere with its specialised root nodules.

The broad bean is most likely native to Mediterranean Africa. It is one of the most ancient of beans, with a history dating back to the Bronze Age and the ruins of Troy. By the Iron Age broad beans had spread throughout Europe. With their slightly earthy flavour you can taste the history in every bite.

In traditional temperate and cold climate agricultural societies it was spring, rather than winter, when food stores were in danger of running low and famine threatened. This is precisely when broad beans deliver their protein rich crop.

Broad beans are good sources of protein, fibre, vitamins A and C, potassium and iron. They also contain L-dopa, a chemical the body uses to produce dopamine, an important neurotransmitter involved in learning, mood control and motivation. Some also use fava beans as a natural alternative to drugs like Viagra, citing a link between L-dopa production and the human libido. Why not try incorporating the grey-green broad bean mash into your next romantic rendezvous.

Warning: Raw broad beans should be avoided by people with the rare hereditary condition known as G6PD, for whom ingestion can cause ‘favism’, a type of anaemia which is sometimes fatal. For the rest of us it still makes sense to eat raw broad beans only in small doses until our body builds up the required enzymes to digest them well. Or you might do a fart.

Broad beans are one of the easiest plants to grow in your VEG patch.

In the Melbourne climate, March till early May is the ideal time to plant out broad beans, though if you have a warm micro-climate or greenhouse cover this can be extended till early June. They will be ready for harvest during the spring. These plants do not require any nitrogen inputs, however like almost all plants they should get a good layer of compost.

Staged planting is best – every 3 weeks from late March until the start of June. Do not plant too late as the crop will produce low yields. The first beans should be ready to pick at the end of August and up until the beginning of November. The pods should be 6-8 cm long.

Sow about 3cm below the surface and about 10-15 cm apart. Beans begin to ripen from the base of the plant up, so check the lower part of the vine from early spring. They do not like wind and will benefit from protection, and will more than likely need a support if not densely planted. Even densely planted beans will benefit from some loose string tied between stakes to hold up plants just around the outer edges of your patch.

Aphids, caterpillars, and nematodes are the most common pests. A fungal disease chocolate spot is the main disease they suffer from. We use natural sprays and biologically rich soil improvers to ward off these problems.

They will store for around a week or so in a cool place or dried for at least one year.

The young growth tips of the plant are edible and quite tender when cooked. The bean itself can be used fresh or dried. Broad beans are the most common fast food in Egypt and surrounding areas, where they are commonly eaten for breakfast cooked with an onion and tomato sauce.

We like them wok fried to make the tough outer hull crunchy. They are delicious boiled, then blended into a spicy dip with lemon, garlic, chilli and yogurt. Immature pods can be steamed and served whole.

Dried beans are ground and spiced as the basis for falafel mix.

In Sicily, small sweet cakes made in the shape of broad beans are known as fave dei morti or ‘beans of the dead’. They are served on the annual Day of the Dead. Children are told that the sweets are left in the night by dead relatives and loved ones, which apparently creates a great excitement and rush in the morning, although we think that could equally feel quite creepy. According to tradition, Sicily once experienced a failure of all crops other than the beans.

The term ‘fabian’, originally referring to emancipated slaves during the Roman Empire, is derived from the Latin faba for the broad bean. So when you think of broad bean, think of freedom! And cake depositing ghosts.

Despite the rich cultural heritage, no civilisation has ever, so far as we know, worshipped a broad bean god – which seams like a terrible oversight given the bean’s awe-inspiring properties. Therefore we give you a god of our own creation: Lord Fava, the best and only broad bean god to have ever existed. He is great and powerful.  Love and fear him. If you have a pre-existing blood condition, he might smite you. But for the rest of us he brings fertility and protein. His hands are surrounded by powerful balls of nitrogen fixing nodules. They are filled with magical microbes, his familiars. I say ‘he’ but ‘he’, like most plants, is hermaphroditic. No body knows what’s underneath that loin cloth.

Join us in prayer, and the sacrifice of a young goat, as we thank Lord Fava and the Broad Beans. 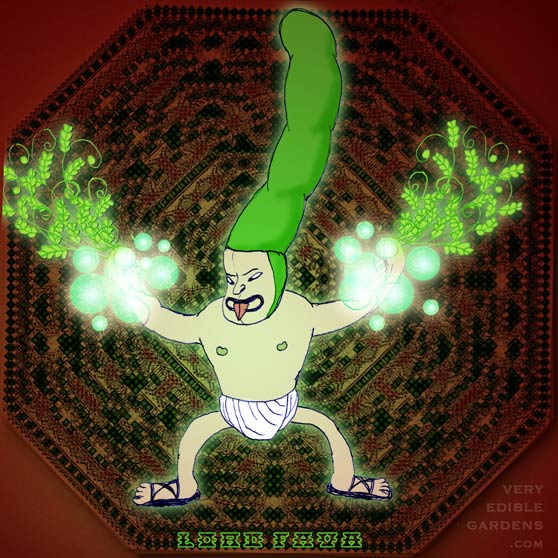 He may look like a gratuitous cultural mash up mess, but really, that’s just how he appeared to us in the vision!

April in the Garden