A personal perspective on the beginnings of VEG

Toward the end of eleven years at university I had a sobering realisation. It came in two parts. First, as characters in the story of modern humanity, we inherit deep assumptions that tear us apart. We then live our lives as if it is normal to separate things like mind and body, theory and practice, humanity and nature. Second, if I was to apply the realisation that such things never were and never can be separate, I had to leave academia.  Academia was the ultimate statement of too much theory disconnected from too little practice. I didn’t want to end up another brain on a stick speaking in big words without meaning or relevance to the wider world. I only hoped it wasn’t too late.

So I started feeling around for something more meaningful to do with my life. The first cab off the rank was sourdough bread making, bringing body and mind together to partner with millions of friendly microbes. If you can ride out a few initial failures, you have something anyone can appreciate. 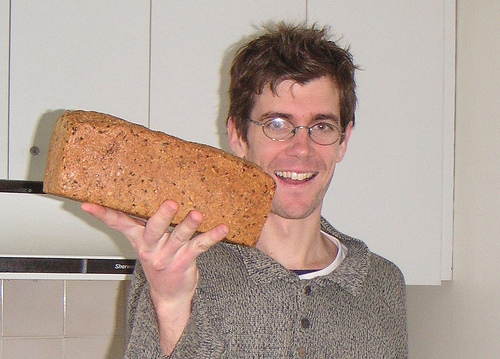 Loafing around after uni

I also started dancing salsa with a group of South American immigrants. I think they put up with me because I brought them bread. 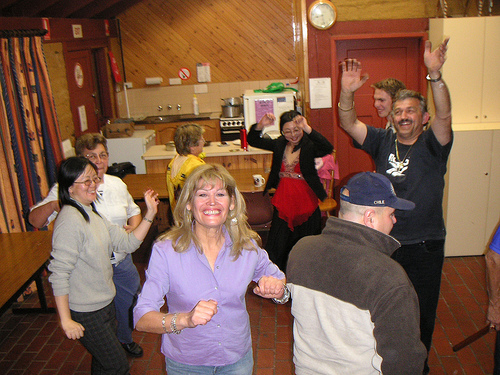 Then came backyard veggie gardening.  Vegetables led to composting, to chooks and then ducks. I was on a slippery slope, and I was loving it, and there was no turning back. 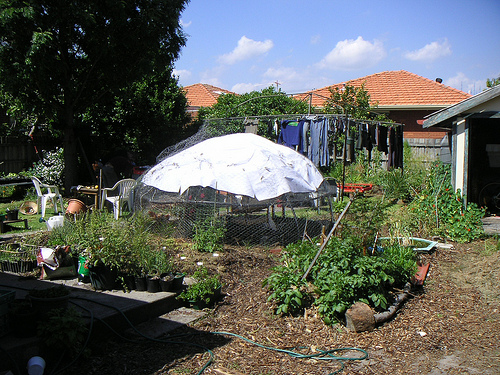 Our Thomas Street garden in Clayton. From lawn to lunch, much to the dismay of the landlords (but that’s another story)… 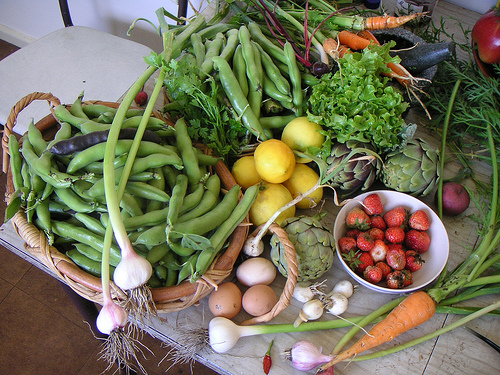 A harvest from the Thomas St garden 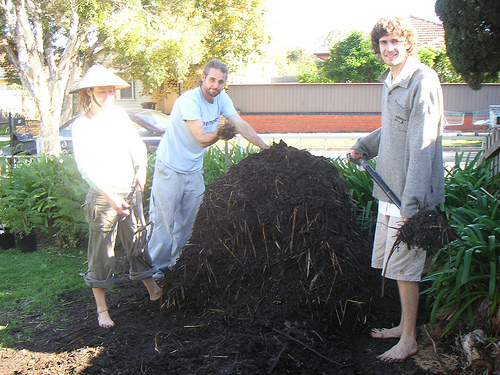 In late 2005 I enrolled in a permaculture design certificate course. This changed everything. Far from some alternative gardening movement, I discovered that permaculture was a far-reaching design approach integrating many of the separations I was trying to overcome. If you had to sum up permaculture in one word, it would probably be connect. 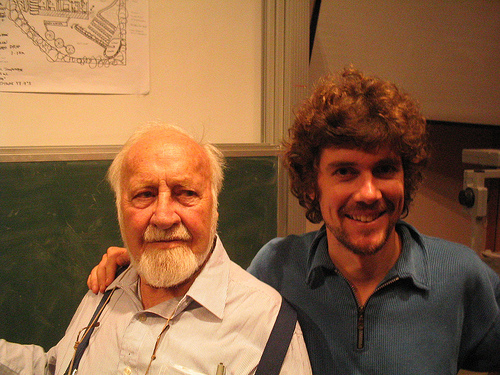 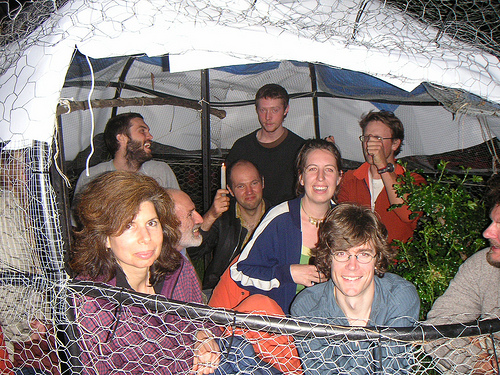 Celebrating the end of our PDC in my chook tractor

What is more, here was something with overwhelming relevance to problems we all face. To say I left that course with momentum is an understatement. After eleven years playing academic word games I had a lot of catching up to do in the world of meaningful action.

A guy with the nickname Grubby sat next to me during the course. He was already an acquaintance twice removed, but after the course we started hanging out. Adam had founded energy bulletin (now Resilience.org) and was organising workshops called greening the apocalypse and a blog called Eat the Suburbs.  I started getting involved, and it wasn’t long before we got permablitz rolling in early 2006.

It was by permablitzing that we cut our teeth as designers. We practiced designing then implementing edible gardens around Melbourne, initially with my South American friends.  These were heady days with much laughing and learning and pupusas all rolled together.  I remember a moment at the second ever permablitz where I stopped for a second and had this spine tingling feeling of deep elation at a bunch people coming together to do something positive and meaningful. I’ll never forget that moment. 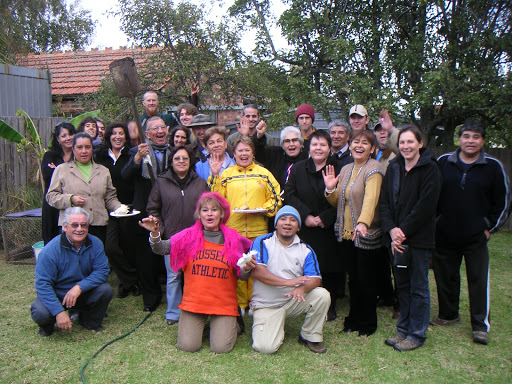 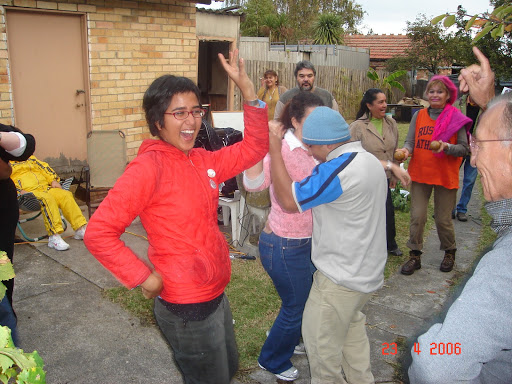 Asha Bee, who first coined the name “permablitz” and wrote an early article about them.

After several permablitzes I started traveling around to learn more. I made a banana circle in India, spent several months visiting permaculture properties in NSW and Queensland, and attended a permaculture convergence in NZ. 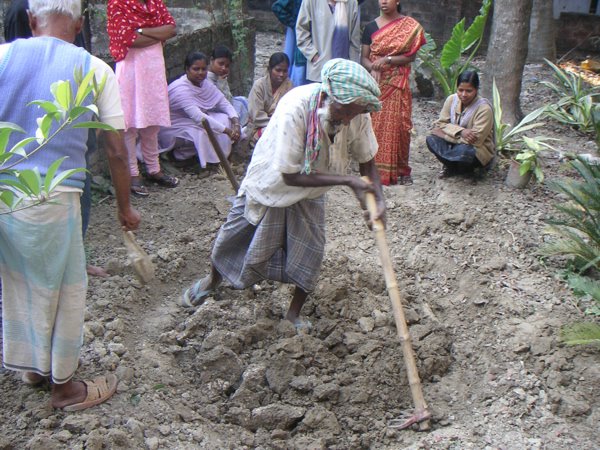 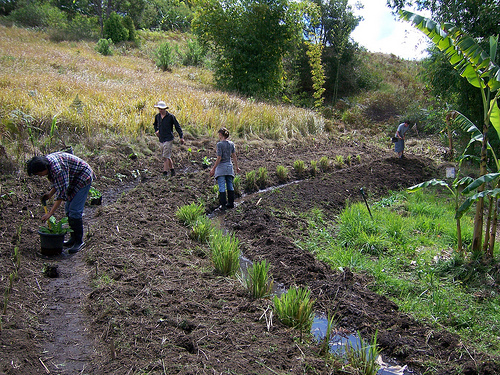 Working on subtropical terraces in NSW

Meantime, Adam and others kept permablitz going in Melbourne. The rest of us came and went, but Adam stayed with it. He was a continuous presence quietly holding permablitz together until it got its roots down into the subsoil and sprouted the awesome organising collective behind it today. I’ll always respect Adam for the energy he put into permablitz, and for never once expressing a word of reproach for my helping start it then taking off to leave others and ultimately him carrying the baby.

Permablitz.net banner (that’s me on the left waving my hands about)

Whilst on the road enjoying permaculture adventures, I got a call from a lady called Kim with the fascinating proposal that she pay us for permaculture design services. The design we completed for Kim and Clive’s Heathmont property was our first foray into professional design. Seven years later we feel proud of our design, even the swales. In the process Kim and Clive have become close friends. They are like surrogate grandparents to my daughters and Kim now works for VEG. 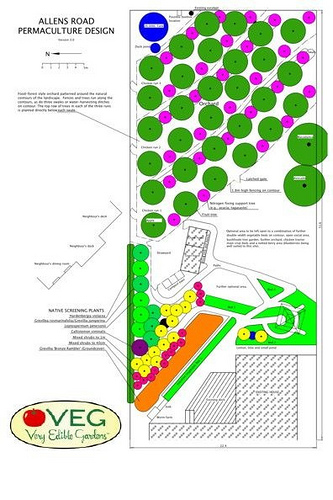 Our design (Which Cam Wilson helped us with). Take a post-install tour here. 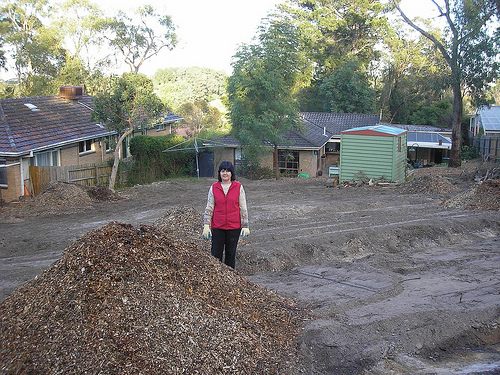 Kim surveying the decimation of her backyard 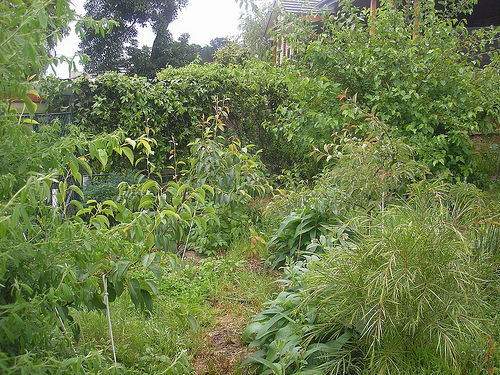 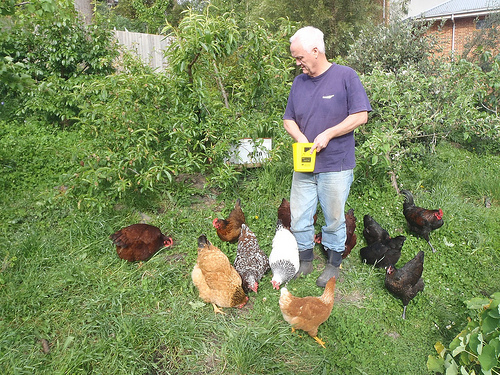 Somewhere along the way a green entrepreneur named Alf was flicking through the Saturday Age. He contacted us after reading an article about permablitz. His suggestion was that we create a business doing this stuff – turn our weekend passion into a livelihood.

This sounded like a bit of us, so we started having meetings to discuss it. The initial seven of us dwindled to four over the next year.  The other three were kind enough to keep me in the mix when I disappeared to Africa for six months (while they kept meeting).  I helped Rosemary Morrow run some permaculture courses in Ethiopia then start a permaculture project in Uganda. More importantly, I met my future wife Amanda (who has been an amazing support to VEG over the years). 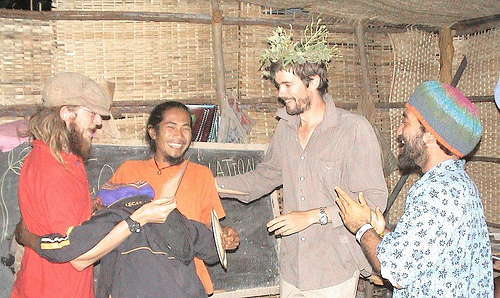 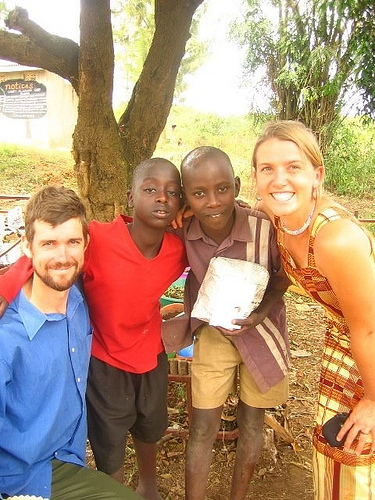 Manda & I in Uganda with keen permaculture volunteers Kaleem & Moses

A video clip I made of the Sabina Permaculture Project

Shortly after I got back to Melbourne all four of us signed on the dotted line.  At that moment, Paul Fogarty, Nathan Edwards, Adam Grubb and myself became co-owners and directors of a company. I still remember signing. It felt surreal.

We needed a name. Alf suggested Garden Ready Organics (GRO), then I suggested Ready Edible Gardens (REG). With REG I pride myself on laying the foundation of Nath’s epiphany. With a single letter change this not only became the catchier Very Edible Gardens, but it shortened to VEG!

That was that – VEG was born. It was February 2009 and we launched at that year’s sustainable living festival in Melbourne’s Federation Square. We were excited, dripping in ideas and enthusiasm. We were also amateur designers and gardeners with no idea how to run a company.

Whilst we fumbled through our first year, Paul left to pursue another business opportunity. A few years later Nath followed suit to raise a family and a house in the country. We all stay in touch and Nath helps out on VEG jobs in his area.

This left two little birdies standing on the edge of the VEG bed. Each year we learned a lot and slowly we starting getting a feel for what we were doing and developed systems for making it easier and doing it better. Honing in on the sweet spot between reusable templates and creative site-specific solutions. 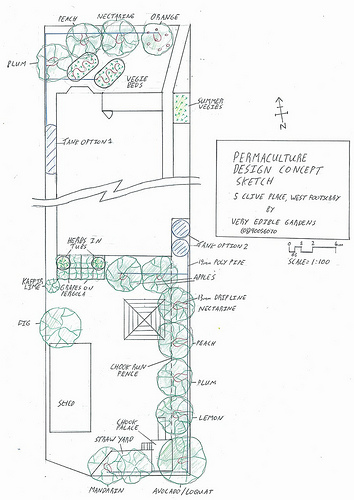 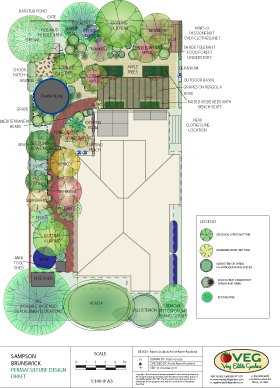 As well as design and vegucation, I really enjoyed coordinating landscaping jobs, developing our chook systems, wicking beds, and whatnot, making it all up as we went along, and learning from what did and didn’t work on the ground. 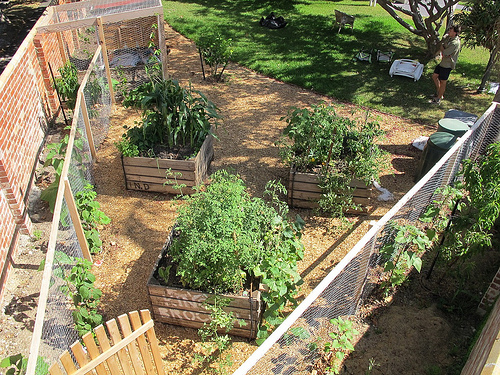 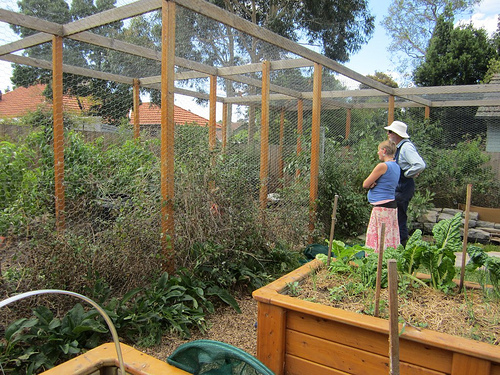 We were helped on our way enormously with advice, support and in many cases encouragement from mentors further along the same or similar tracks.  I’m not going to attempt to list them all, but many of them are mentioned here in my VEG team profile. 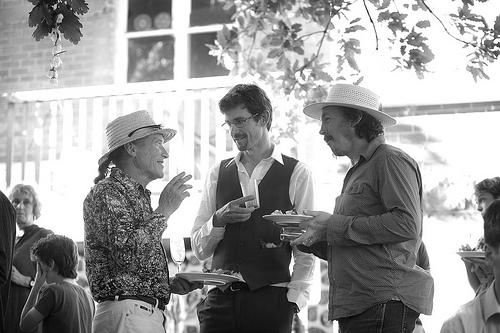 It has been a pleasure to get to work with Adam through all of this, and I feel we have complemented each other well. One of the aspects of the whole VEG experience I’m most grateful for is that our friendship has improved through being business partners. That said, Adam is the worst navigator I have ever met and is directly responsible for an embarrassment of wrong turns. 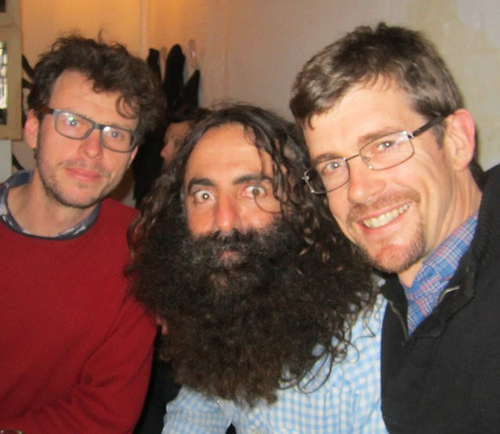 Adam and I sheltering by a friendly hedge in 2013 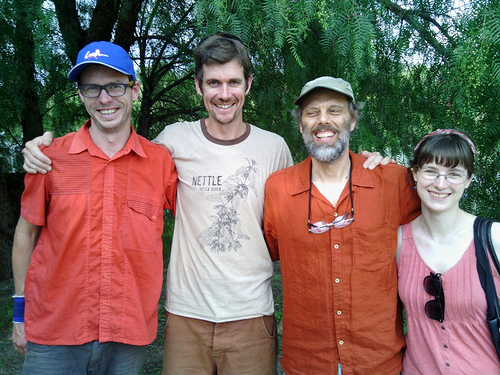 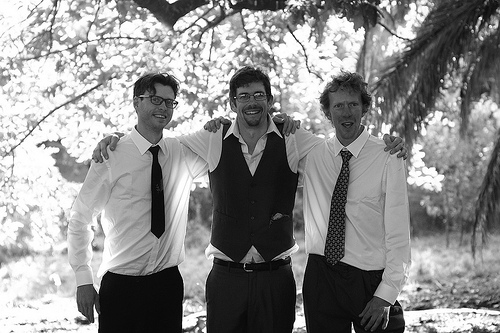 Grooming my best men at my wedding (Adam and Carey)

We ran VEG out of a 1984 Toyota Camry station wagon for a good few years. A friend’s dad lent us some warehouse space in Braybrook (Thanks David!), and another friend let us use a small office space in the attic of a building in Fitzroy (Thanks Phil!). These and many other gestures of support made a huge difference and kept us in the game long enough for things to work themselves out and for VEG to eventually become viable. 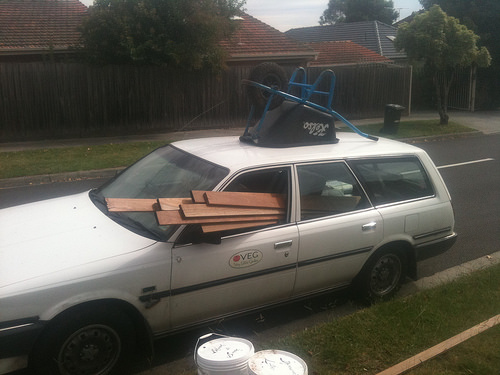 Togalogs as she was known 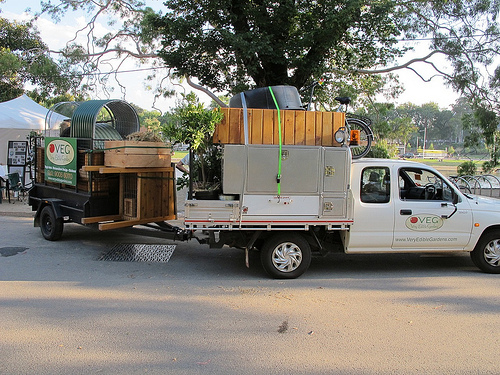 The VEG Ute was a game changer…

For the first few years VEG was a bit all consuming for me.  I think I had a bit of a “we’ve gone too far to turn back” mentality. I went pretty hard. That is the interesting thing about starting a small business: by the time you realise how hard it is you are too committed to give in.

But we did go through a spot or two there where shutting up shop was a very real possibility. Our baby started turning into a monster and taking over our lives! This didn’t bother me at the time (I was pre real babies, and didn’t have much of a social life anyway), but Adam was waking at night thinking about work, and he made it clear that if things didn’t change he was going to have to bow out.  Although it felt kind of relaxed, it was the closest thing VEG has had to an existential crisis, given that no more Adam would have likely meant no more VEG, and it would have been a shame to let it go at that stage.

I am so grateful we bumped into Allan Savory’s holistic management framework for decision making at this time. We gave it a try and haven’t looked back. A shared commitment to the holistic context that now constitutes VEG’s backbone is above all else what got us through and enabled us to tame VEG, turn it from master to servant. When being part of VEG started genuinely enhancing the quality of life of those involved, we knew we were onto a good thing. Not to say it doesn’t still make a power play from time to time, but we’re getting better and better at getting it back in line. 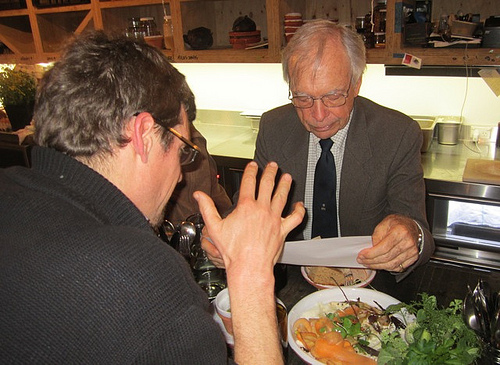 Personally, managing VEG holistically has made running a business compatible with raising a family. With VEG’s workload now shared across around seven people, I enjoy plenty of family time and work from home as often as not.  Life is good and being part of VEG is a welcome part of this goodness. 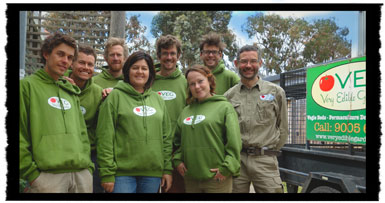 Through VEG I have tasted the power of productive collaboration between people on the same page. It tastes good. It really feels like something to have a bunch of folk who like each other working together in, on and toward something we all believe in.

This feeling extends to our relationships with our customers. It starts with a gentle nudge – the design or construction of a little edible ecosystem, maybe a workshop or course. Sometimes it is subtle, but the resulting change is much greater than a few homegrown veggies or eggs.  In nourishing a bit of nature that in turn nourishes us, it is like something shifts in our relationship with ourselves, and therefore with others. Separations dissolve and it is like the world becomes a little bit more beautiful, and a little bit more abundant.