As part of International Compost Awareness Week, Moreland City Council together with Moreland Community Gardening, and VEG, got together for a rain-hail-or shine free intro to compost & worms – and rain it did! But that didn’t stop a good bunch of people coming from far and wide to learn all things compostable; turning kitchen scraps and garden debris into black gold! Feeding the soil that feeds us – now that’s worth doing any day of the week!

Dr. Compost even made a special appearance courtesy of Cultivating Community, and the West Brunswick Community Garden made an excellent venue that is well worth checking out.

Without any further ado, introducing…. 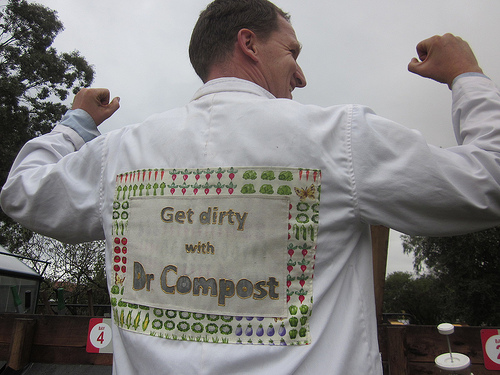 Witness the awesome power of Dr. Compost – and the handiwork of the legendary Hannah Maloney formerly of Cultivating Community, now making the magic happen in Tassie. Check out the awesome article on hot compost, at Hannah’s new project Good Life Permaculture 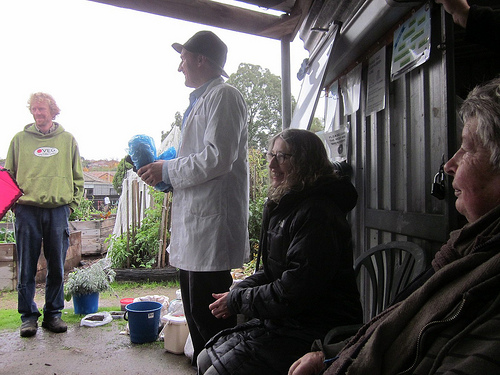 Dr. Compost warms up the audience as we huddle in and take shelter from the rain 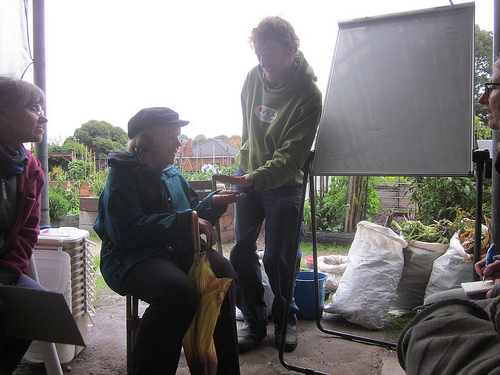 …and VEG’s Carey shares samples of the once-scraps-but-now stable, dark, humus-rich material we call compost – alive with beneficial bacteria, fungi and a host of other micro (& macro) organisms that form something akin to a protective force-field around the roots of plants in a symbiotic exchange of nutrition, disease suppression, and company 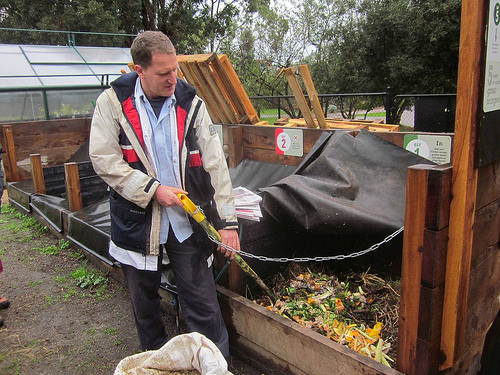 Here Dr. Compost demonstrates incorporating fresh material into the first bay of the 5-bay compost system at the West Brunswick Community Garden. Not only is the compost facility available to and used by the community gardeners, it an incredible free public resource known as a Community Composting Hub! That’s right; with half (ouch!!) the average wheelie bin going to land-fill being comprised of compostable organic matter – which then decomposes anaerobically (in the absence of oxygen) to produce the potent greenhouse gas methane – innovations such as the compost hub allow nearby neighbours and local residents who may not have the space or wherewithal to manage their own compost, to do so with others in a safe learning environment and make friends at the same time!! 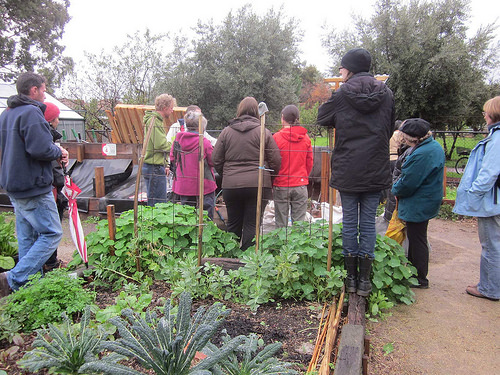 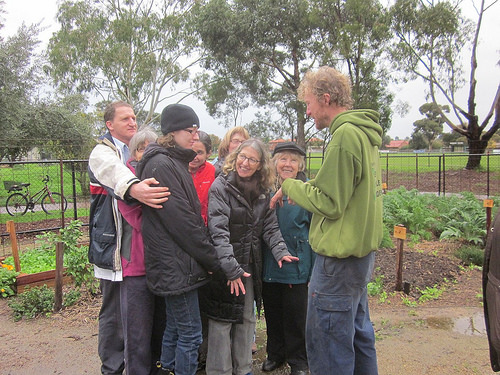 ..and be prepared to spontaneously mimic compost micro-biology. Carey naturally posing as the hungry root-eating nematode – but never fear, he was repelled by a solid posse of beneficial microbes protecting the plant roots! 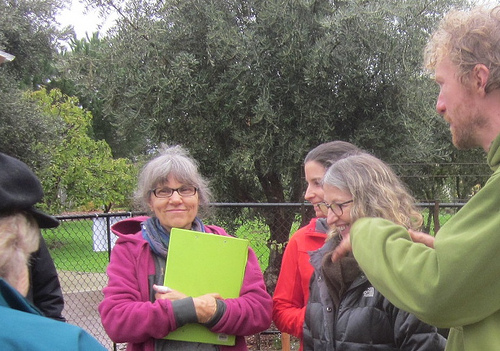 Of course, when one laughs, one’s information retention ability is increased, so we find a balance between theory, practice, and humour 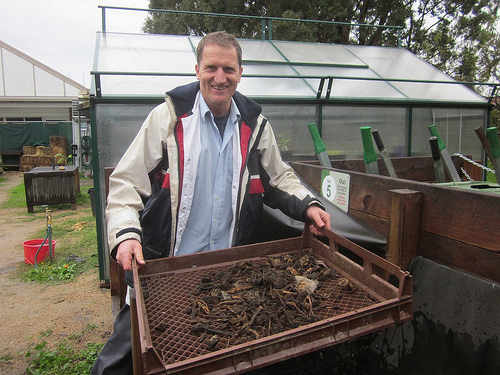 Number Five is alive..! Dr. Compost at the final stage of the five-bay system, sieving the more coarse material before sending it back for another round of decomposition 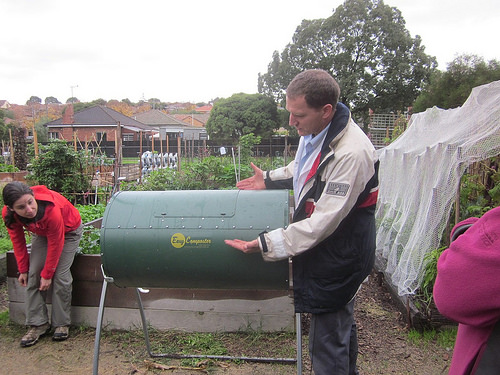 Come on down! Thanks to Moreland City Council, there was a bunch of super cool compost-making prizes, including this first prize of a spiffy compost-tumbler; beautifully modelled too, Doctor 🙂 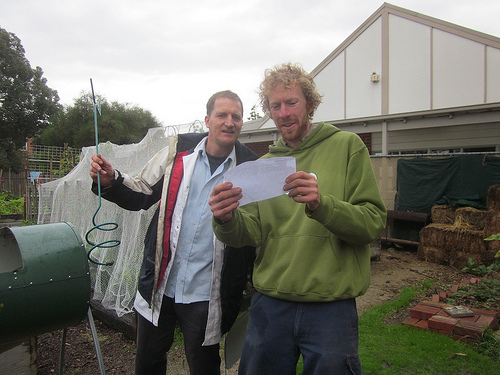 Second prize being the ever-handy compost-corkscrew – never have your compost lacking oxygen again! Highly transportable, with one of these babies just follow your nose and help correct ailing composts everywhere! Seriously though, the oft cited experience of many people having attempted compost making, sadly, is that it stank.. And one of the prime, requisite components for a living super organism like a compost, is oxygen. Aerobic bacteria & fungi such as those found in a well aerated compost of balanced nutrient and water content, impart the distinct and pleasant aroma of a forest floor – sweet, rich and earthy. You may not have a fancy corkscrew, but you might have a garden fork, and if you detect your compost to be on the nose, try fluffing it up (if not turning it completely) to incorporate more oxygen, and add some dry carbon-rich material like straw, sawdust, shredded card-board, newspaper, autumn leaves or the like. Bad odours are actually nutrients being lost as stinky gas to the atmosphere, but when a balance of oxygen, water, and compost foods (the carbon to nitrogen ratio) you won’t have this problem, and will be getting maximum conversion of food-scraps, garden debris etc into stable, humus-rich black gold compost. 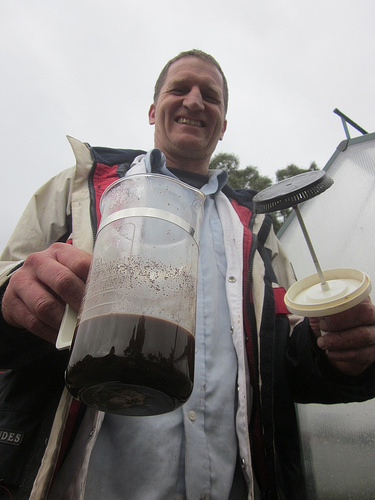 Dr. Compost likes to keep his mojo pumping by downing a beaker of worm-wee.. and who wouldn’t?

That said, the spent coffee grounds shown above are an excellent addition to the compost, worm-farm, or even soil, so use this map to search out cafes around Melbourne and Australia who support the Ground-to-Ground initiative.

Now just in case you can’t get enough compost in your life, you can join VEG for another FREE intro to Compost & Worms workshop at the Castlemaine Community Kitchen Garden next Saturday May 24 1030am t0 1230pm. Templeton Street, Castlemaine.

Of course, once you get into this stuff, you’ll need to step back and gain perspective on what it means to be into permaculture, as the closing image explains.. 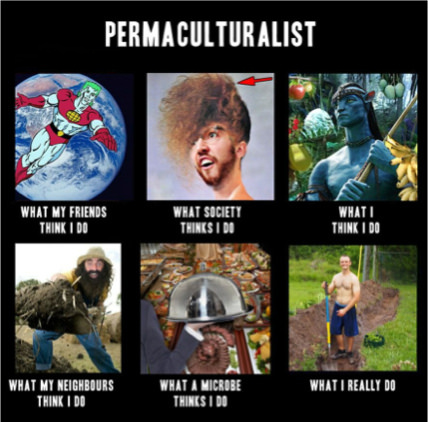