On April 14 2013 VEG’s first-ever PDC group visited Dehesa Felix, which is the small farm property of Darren J.Doherty, Lisa Heenan, and family, near Bendigo, Victoria, Australia.  As part of the day moving around the property, Darren explained in very easy-to-understand language his understanding of how we can go about building soil with grasses and animals as co-partners.  We transcribed some of what Darren had to say and make it available here with his kind permission.

“…how it works is that your plants make your soil.  What happens is that each of these grasses when it’s living or alive is taking sunlight, mixing that with carbon dioxide, and then splitting that up and turning it into water and turning it into oxygen and turning it into sugar – carbohydrate.  Now a lot of that sugar is being let go by the plant, because the plant is gardening for itself.  It has a microbial community, which it is responsible for feeding.  That’s the whole co-evolution of all of this, that you’ve got these plants, which are getting rid of this excess carbohydrate, in the form of polysaccharides, excluding that out of the root system, and then feeding that to the microlife in the soil.  So it’s a sugar party down there.

Then, as I call it, underground composting occurs – a mouth eats that juice, and then it excretes it.  It’s in a liquid form, so it gets excreted as very broken down carbon, very stable, which is called humus.   That’s the sort of thing that’s going on in here. So we want to encourage grasses as they’re the most efficient at doing that, because they don’t hold onto it – they don’t make a tree. Like a tree, it’s doing this, but most of the carbon it’s storing is in the tree, or in the root system, about 50 percent actually. That’s why when you dig up trees you don’t have much soil underneath them. 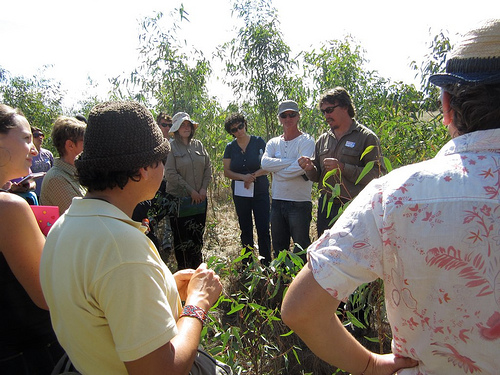 The great agricultural or cropping regions of the world were not forests. They were perennial grasslands, by and large, or savannah country.  So we’re using grasses and I’d invite you to do the same.  Like a lot of people will cover their grass – they’ll come in and they’ll sheet mulch it or something like that, over a very large area, and then still don’t have much soil.  Then they bring in carbon.  So the best thing for you to do, is if you need an instant garden make a no dig. You don’t need a very big area to do that, to get the area you need for your own vegetable production and consumption, but for the rest of the area, if you’re trying to improve it, actually enhance and promote grass growth.  You will not get any better carbon sequestration and soil building system than perennial grasslands.

Now you can do this with your lawn. If you have a lawn out the front and you go ‘okay in two years time I want to put in a fruit tree,’ or ‘I’ve been to see Dave Jacke’ and you’re all excited about forest gardens, you want to put a forest garden in.  Well what you need to do, is you need to build some soil, because at the moment you’re running around with the lawnmower and you’re doing like what a bloody kangaroo does, or someone overgrazing with cattle does, you’re keeping the root system short, because there’s a direct relationship between the root system depth and the leaf height.

So if you only have grass that’s this high, it’s like having a house that needs ten kilowatts of power, and you’ve only a got a five kilowatt system.  So you’re in deficit, in energy deficit.  It’s the same with grasses. If you keep your grasses low, well then you keep your root system low, and that’s what causes you soil to be shallow, and for it to be compacted.  So, the best thing for us to do is physically take out that compaction, you can do that with your garden fork, or one of these broad forks, you can find these patterns like we have here, you come in with your broad fork, give it a little lever back, it’s slow, but your area is small.  Take out the compaction, then let your grass grow.  You let it grow, don’t mow it til lit comes to flower.  All the weeds growing in there, don’t pay attention to what’s in there, it doesn’t matter what type just let it get to flowering.  What happens is, when you let a plant get to flower, Yeomans said when you graze or cut grasses or pastures at that stage, then you stem the reproductive urges of the plant. So what happens then is that the plant goes into some kind of shock.  You go from having big, full, pumping leaves, and full production system of carbon, liquid carbon going into the soil, into the soil, to nothing.  Because now the plant’s going into the survival.  An animal’s come along and eaten it, it’s like just getting rid of all those solar panels, therefore the leaves aren’t there to support all the roots.  So the roots fall off, and what happens then? You get ‘underground composting’ as I call it.  All of the organisms in the soil then get into all that stuff, and then convert that into some sort of organic carbon. 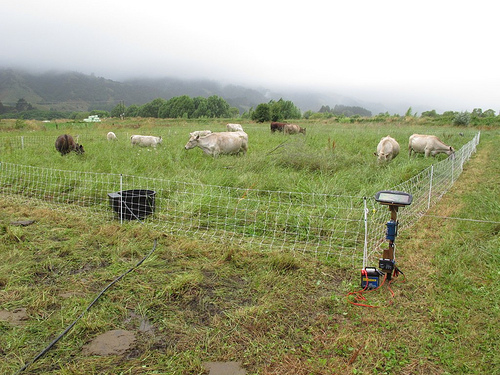 So then, this is the really critical part, is that you have got then let that recover.  Normally, if you don’t have irrigation, it might not recover, because the rain stops and there’s no water to keep life recovering so that’s the end of it and it comes up next year.  So that’s what we do, we keyline plow or broadfork, let the grasses grow up, cut them, mow them, eat them, and then, come back the next year and do the same thing but now, when we take out the compaction the root system is following the loss of compaction and the plants are starting to exhibit their physiological potential.  Of all these plants here very few of them are exhibiting their physiological potential, because of compaction, or other limiting factors.

So when it comes to things like couch grass for example, couch grass, bent grass, kikuyu, all of these species, are all rhizome species that love compacted soil. Love it.  So as you take out that compacted soil do you think it’s suitable for the couch anymore? It’ll still be there as a component, but what now happens is you get a succession to other species which can then dominate the couch, or the kikuyu, or whatever else.  So you’ve got to change the way you think about these things and work very much with succession – it’s a really important thing to get your head around and to use these techniques to enhance that prospect. Because isn’t so much of what we want to do here about establishing potential? Or enabling potential? In all of us, and all of our systems etc? So once you understand things then you can do just that.

So that’s what we have done in part here.  We haven’t used any animals unfortunately… One of the reasons we like to use animals because instead of this getting cut, and diesel being burned, this gets cut by a mouth, a non-mechanical mouth, it goes through another composting, then comes out as this beautiful compost… Cows are fantastic; they are the best soil-building co-partners there are. The reason why is that they are so inefficient.  The reason why is that the bigger the animal the more inefficient it is. The most efficient animals are the smallest. So bacteria are super efficient. They need very little energy, so their energy ratio is much more efficient. That’s why algae for biofuel production is going to be so much better that any of the plant based stuff, because you’re dealing with very very small organisms, they’re very energy efficient. 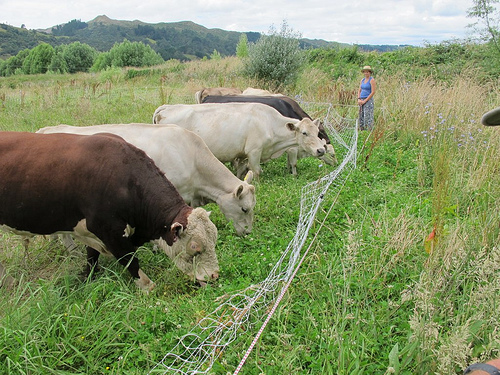 When you get a cow, a cow is a bloody big animal, it is two square metres, and a cow eats between 9 and 20 kilograms of dry matter per day, 75 percent of which comes out its bum. So it doesn’t absorb a lot, cause it uses so much energy just to stand up. Like an elephant, my god, such an inefficient animal!  A cows drinks between 40 and 80 litres of water a day.  So where does that go?  Can you see the method in our madness here?  If we’re concentrating these animals, and we’re moving them around, what have I just done?  I’ve watered it with liquid manure!  What if I feed the animal minerals?  Everyone here you’ve had vitamin capsules, you go, and you can smell your minerals that you haven’t absorbed [in your urine]!   These minerals now because they’re in liquid they are biologically available.  So you start to do this, this is why I’m very excited to have animals, because I now know I am going to have this really big boost in mineral cycling that’s going to happen here, whether it’s a guinea pig, a rabbit, a cow, a sheep, or whatever, you’re going to have this happen.

Now you all realise that poultry don’t pee, because they have a cloacha.  So their poo and wee is mixed together.  So it’s a bit of different thing – you won’t get an irrigation system out of a chook.  But goats, cows and sheep are all ruminant animals, they have multi-chambered stomachs, and so they are very adept at reprocessing quite poor quality materials, and then the manure that comes out the back is of a very high quality.  The cows are the best because it doesn’t roll away.

Now imagine I had ten cows, and the grass was up a bit higher, say we are in spring time and the grass gets to about 60 cm.  I have this little area fenced off and they are in here for one day, what’s it going to look like at the end of the day?  It is going to be covered in manure, and urine everywhere, magnificent concentration of cycled biomass and water that I’ve got from this site.  Then what happens?  I’m in the next cell. What happens here now? What’s the succession that follows?  Flies are going to come in, all the bugs, dung beetles will be here, birds will be here, stacks of magpies and goodness knows whatever else. They’ll come. 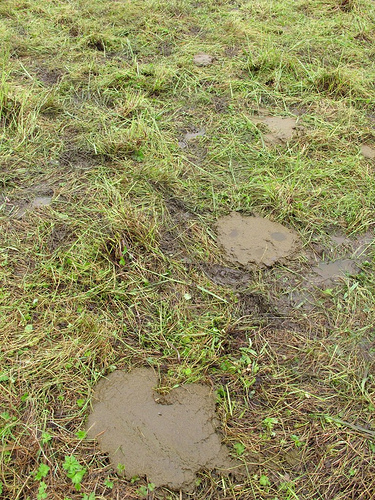 We’ll bring the chickens three days later, because at that stage the maggots have formed – the fly larvae from the flies they have come in and deposited.  No we’ve got a protein feast for the omnivore which comes through.  What does the chicken do?  Scratches!  Right so it scratches all of those large (manure) masses down, and spreads it. 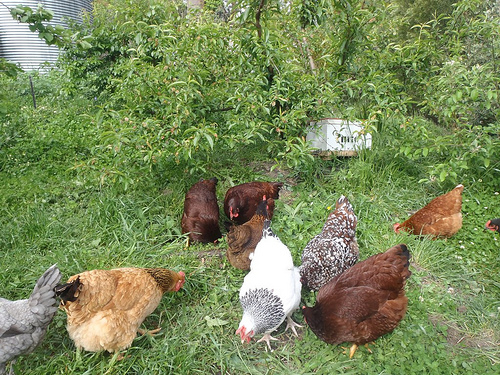 Like a farmer gets a harrow behind a tractor and breaks it all down. We don’t need to do that we can use a partner called a chicken.  So they’ll do that. Now what happens?  All of those particles get smaller, the smaller the particle the quicker they’re going to be reintroduced to the soil.  We are going to accelerate therefore the whole process of soil creation here once that occurs so I’m pretty excited about that”Darren J Doherty of HeenanDoherty speaking to a VEG PDC group April 14 2013

The waterfall in the oak