Last Wednesday November 12, VEG’s Adam, Cassie & Carey headed out to Sunbury for a wonderful two hour introduction to Permaculture, hosted by Hume City Council, at the ornate and impressive Ruperstwood Mansion – a bit more luxurious than your average neighbourhood house, but we managed to blend in, or at least not stand out too much… Way to go Hume City for putting on this cracker of an event, and be sure to check out the Hume Enviro Champions project, featuring none other than VEG PDC graduate Phil, who’s undertaking the co-design of his (and possibly Sunbury’s) first ever Permablitz.

The old mansion neighbours the Ruperstwood Selesian College VCAL farming project, which is going gangbusters supporting the next generation, and saw the event furnished with boxes of uber locally grown fresh produce (how’s 50m away?), bottles of worm wee, and bags of chook manure… just the kinds of things we needed to feel at home 🙂

But while you’re at it, prepare to be impressed by the force of nature that is Bruno who runs the college’s Twilight School. With a focus on social justice, inter-generational community engagement, health & well-being via the arts and learning programs, the project is one well worth connecting to. From addressing domestic violence to cooking classes, singing, and mental health initiatives, Bruno and his team are making a serious contribution to a better society, so get along to one of their events soon!

Equally impressive was the catering by Norman of Just Planet who knocked our socks off with a fine spread of raw, vegan, organic, gluten free but crazily tasty treats. Norman also humbled us with the real difference his establishment is making toward promoting equity both locally, and globally; enter the fair-trade gift shop, cafe & educational hub that is Just Planet. With a good whack of the food grown onsite in the food forest or sourced locally, other foods, the fair-trade coffee and gifts from abroad make all the difference when we put our buying power directly into the hands of those who need it most – the growers & makers, not the middle men. “We really can make a difference on a local & global scale through the choices that we make,” Norman implores, with Just Planet’s wares providing a fair deal and support for small growers’ cooperatives, village artisans, and craftspeople on the street fashioning incredible works of art from the debris of consumerist society. All this whilst putting real food in people’s bellies locally. More power to your elbows Norman!

Prepare to salivate (for the food, not for Norman…) 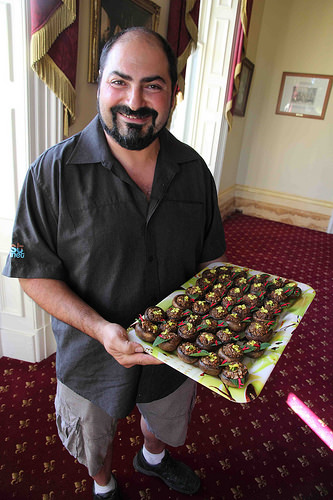 Cop a load of that! 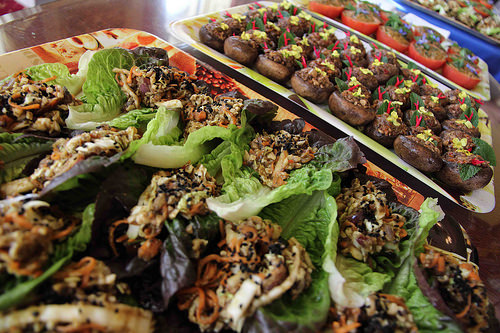 And so Adam had his way with the 40 strong crowd, introducing the somewhat nebulous and oft misunderstood concept of Permaculture. Weaving theory, discussion, humour and hands-on practice, he brought together the central concepts necessary to help people design and establish their own edible oasis. After focussing on the importance of people analysis (what the people at a given site actually want, and what is realistic for them to achieve), we all bundled outside to tune into site analysis to assess the strengths and limitations of our surrounds. 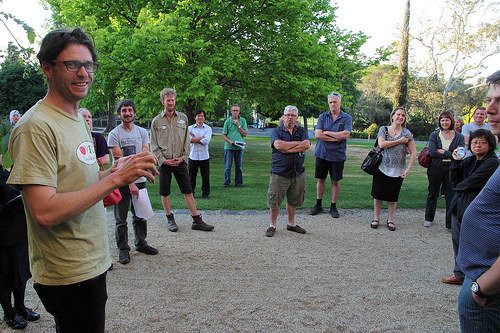 As it happened the mansion with its large bluestone blocks had soaked up midday & afternoon sun to create lush subtropical microclimates around the north of the building, whilst deciduous vines – by design or accident we don’t know – shaded the western lower half of the building, taking the sting out the hot sun late in the day. These seemingly small features can greatly influence the range of plants (eg bananas) that one can grow in a cool temperate climate such as Melbourne, or simply make the difference between a comfortable summer afternoon, and a scorcher.

Here Adam is demonstrating how to fly on the thermal updraft, created by solar energy stored in the solid mass of a building, to harvest bananas – people weren’t buying it but they’ll come around.

Getting participants to put themselves directly in the picture by tracing the sun path through each season, Adam helped folks understand how drastically winter shade and summer sun exposure change throughout the year, and like the previous example, how these influences can make or break the viability of a garden, or the comfortability of a house or building, whether that’s warmth in winter or staying cool in summer – simple effective tools that people can walk away with to help locate, orient, or retrofit gardens and buildings to work better with less or even no expense.

Showing folks how relative proximity (or ‘oftenest nearest‘) works, Adam may well have saved everyone years of their life from walking unnecessarily to and fro in an ad-hoc garden layout. By simple virtue of locating high maintenance elements like a seed-raising area or kitchen herb & greens garden close to one’s house (or better, kitchen) or frequently travelled paths, much of the maintenance & access can be done visually – just knowing from a glance when to water, weed or harvest can make the difference between catching these things at the right time and staying on the growth curve to happy harvests. Or, making one sweet loop out to hang the washing, feed the chooks, collect some eggs, harvest some veg and have a cranking breakfast in ten minutes flat – things can become less chore and more enjoyment if they flow seamlessly together 🙂