Making Permaculture WHAT? – did you say STRONGER?

We thought those of you interested in permaculture and permaculture design might be interested to hear what Dan’s been up to with his side-project called Making Permaculture Stronger (MPS).  Making permaculture fricken WHAT?  What kind of brazen title for a blog is that!

Yes, permaculture is amazing. Gobsmackingly relevant. Awe-inspiringly solution-packed. But let’s be honest about the fact it sucks at some things, that it lacks or neglects other things, that it has had an embarrassing amount of failures & causalities. Furthermore, if it barrels on oblivious to all this, then when push comes to shove, at the very moment when it needs to shine and get its gallop on, one or more of these neglected gaps or weak spots will see it fall flat on its face, or at the least, failing to shine as brightly as it might have.

a space where permaculture practitioners come together with a spirit of strengthening the design system aspect of permaculture by clarifying its weaknesses and coordinating efforts to address them.

And so far two different weak bits in how permaculture design (design being the core of permaculture) is usually understood, taught and practiced have been (rather thoroughly) investigated.

The first inquiry focused on how it is hard to mimic nature if your approach is joining separate parts to try and create whole systems. The key post on this topic is here, and it includes these two diagrams which compare the standard permaculture approach with the seemingly opposite approach of a chap by the name of Christopher Alexander:

The second inquiry looked at some pretty big flaws with this widespread idea of making a plan on paper or a screen and only then wandering outside to implement it. In this post, Dan explains:

…if you are making your design decisions based on what you’ve just drawn, you just don’t have access to enough key information to avoid making a shitload of mistakes.  You are engaging in some degree of fantasy, and you will get off track. 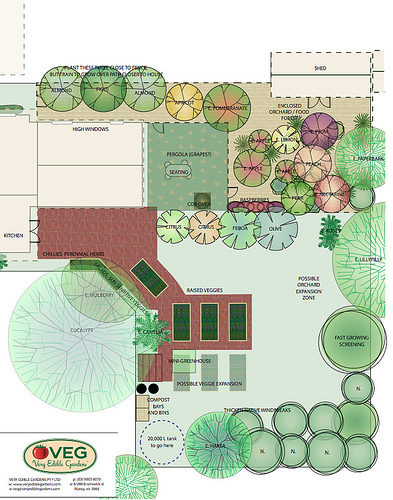 And as we now explain on VEG’s main design services page:

Now that we’ve done so many designs, we’re quite proud of just how quickly we can assess landscapes, and your situation, and turn that into a sweet, functional design; one that avoids common pitfalls, and sees the potential of a beautiful, productive garden suited to people and place.

You might think that our next level involves another layer of detail and masterplanning. But masterplanning — indeed, any overly-detailed on-paper design — tends to go wrong one of two ways:

What?  Well on our journey, what we’ve discovered is that the best design is done iteratively, always one step ahead, but alongside implementation.  The adaptive process allows us to grow the design in appropriate stages.

The Adaptive Design Consultancy option allows us to make more than one visit to your site, and work with you to layout the design on the ground.  We’re talking ropes and stakes, not just pens and pixels.

Aside from these so-called inquiries, MPS includes a podcast, some videos, interesting discussions with people all over the world, and various other bits and bobs. As a wee summary of the thing, that’ll about do it!

What do Well-Known and Respected Permaculturalists Make of all this?

Here’s a sample of the word on the street…

design process… is the core of permaculture, and it’s been a bit of a mystery, a black box… I think there’s a lot of lessons that can be learned from the previous decades of design practice to make permaculture stronger – David Holmgren

I really applaud Dave (Hursthouse) and especially Dan Palmer for initiating this and holding up the mirror and saying ‘hey guys, look at yourselves. Look at what you’re saying. Look at what you’re teaching. Look at what you’re doing. Is that really the best you can do?’ And so some of us older ones in the beginning were a little bit confronted by it, but once we embraced the process, it’s been really exciting, and I think that it will make permaculture stronger – Trish Allen

I think that starting your quest for improving permaculture in the realm of design process is a brilliant place to start, because so much flows from that.  So much. – Dave Jacke

I think Alexander’s concept is much closer to how permaculturists actually design, by starting with something that is already a whole and then differentiating and integrating additional factors into it. The issue is mostly that our language has not caught up to our practice. Thanks, Dan, for the inspiration. I always enjoy revising my thinking to more accurately bring theory and practice into better congruency. – Toby Hemenway

I’m really fascinated by the stuff that Dan Palmer is doing at the moment about permaculture and Christopher Alexander’s stuff… he has a website called making permaculture stronger …which I’d really recommend listeners to have a look at. … It’s very interesting stuff – I love Christopher Alexander’s work and it was brilliant to see someone take the time to try and piece the two together – Rob Hopkins